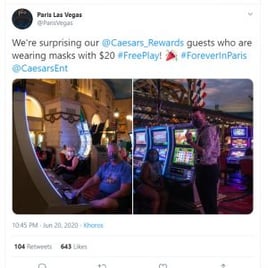 Caesars Entertainment gifted guests for wearing masks by surprising them with a $20 in free play.

Ceasars Entertainment reopened five of its Nevada casinos on June 4th and 5th after they were closed for 78 days in an effort to slow the spread of the COVID-19 pandemic.

The combined revenues of Caesars Palace, Flamingo Las Vegas, Linq Promenade, and Harrah’s Lake Tahoe and Harrah’s Las Vegas, were down a whooping 58% though in the first week of reopening compared to last year’s figures. When gaming regulators allowed the reopening of casinos in the state, they ordered caps at 50 percent of normal capacity and mandated several health and safety protocols.

Operating income at these properties dropped by 110 per cent to 120 per cent between June 4 and June 10 compared to the results from those some properties a year ago. Adjusted cash flow was off between 70 per cent and 80 per cent.

Gaming industry analysts have said they expected regional casinos to outperform traditional fly-in markets like Las Vegas because customers would be more reluctant to be on planes for several hours than to drive 30 minutes to an hour to a nearby casino.

Caesars Entertainment-owned properties recently gifted some of their guests for wearing face coverings while at slot machines. Accounts for Caesars Palace and Paris Las Vegas tweeted Saturday that they were surprising people with $20 in free play, followed by Flamingo Las Vegas on Sunday.

IF YOU WANT TO RE-LIVE THE SIGMA DIGITAL EXPERIENCE GO TO OUR YOUTUBE CHANNELS – SIGMA – WORLD’S IGAMING FESTIVAL AND AIBC SUMMIT!

BOSS. Gaming Solutions hits the ground running in LATAM with a fresh new brand This summer, sports fans in Latin America have a fresh online ...

EvenBet Gaming has become an official sponsor of the first ever SiGMA Americas, paving the way for the leading online gaming software developer ...