New data released by the Times of Malta shows just how fast Malta’s population has grown over the last 10 years, with much of the increase attributed to an influx of foreign workers choosing to build their lives in Malta - particularly in northern villages. The Mediterranean archipelago, which is the EU’s most densely populated state, is home to a population that has skyrocketed 12.8% in the last 10 years, with Malta being the main beneficiary (a 15% increase) and Gozo seeing a decline (11%). 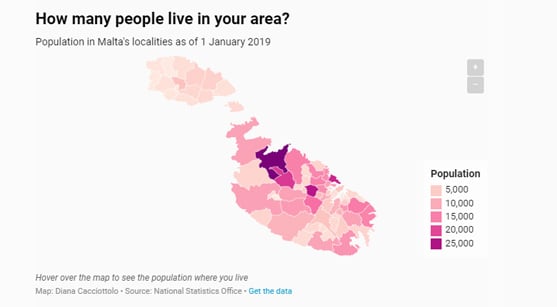 Malta's growing population according to locality.

St Paul’s Bay for example saw numbers reach 30,000 – the result of a decade long increase of 56%, a staggering result when you consider the once tranquil seaside resort had just 18,652 residents in 2009.  The town now takes the crown (from Birkirkara) as Malta’s most populous location.

The St Paul Bay’s mayor, Alfred Grima told the Times of Malta that he doesn’t believe growth is a problem  - as long as there are efforts to ensure things are handled properly. The council, he insisted, needed to be supported by the government and its agencies.

He also pointed out that it was important to ‘take control of an issue and take action’ when a problem arises, such as recent reports of excessive amounts of litter on the streets.

“We cannot stop people from coming... what we have to do is adapt, work on a plan and think positively. It’s important that we discuss and come out with solutions to our problems,” he said.

Students in the thriving university town of Msida will also have to compete with new residents for space, with the legal population rising from 8,567 in 2009 to 13,713 – that’s almost 60% in a decade. Considering the number of gaming companies based in or around Msida, the figures are hardly surprising – in fact, Sliema, St Julian’s and Gzira have all seen their populations on the up, growing over 40% in each town.

As a whole, the official Maltese population reached almost half a million, up from 437,203 in 2009. While steady growth was reported in a majority of localities – there were a number of areas, such as Mdina and Valletta and a number of Southern towns, experiencing decline.

High-growth industries such as the iGaming sector almost certainly have a massive role to play when it comes to the swell in population, with the market demand for skilled workers luring people to the island, and transforming placid villages into hubs of business and activity. And with other emerging industries starting to take hold, such as the medical cannabis and tech sectors, it seems likely that this upward trajectory will continue to maintain its hold for some time to come.

The next SiGMA - World's iGaming Village show is taking place in Malta between 27th and 29th November 2019.  Visit our website to reserve Delegate and Affiliate Passes.   You can also choose Sponsorship and Exhibitor opportunities.