A greater proportion of respondent jurisdictions consider that, in some circumstances, loot boxes would be considered a form of gambling, a report published by the International Association of Gaming Regulations (IAGR) said.

The IAGR, through their Statistics Sub-Committee, is looking to build on the success of their Gambling Regulation – Global Developments reports by producing several mini-survey reports throughout 2020. 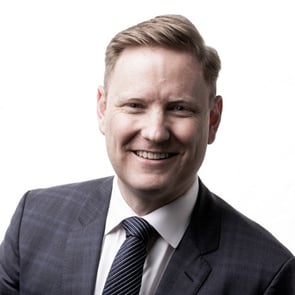 “With 80% of respondents agreeing that gambling regulators should work together to monitor these forms of gambling, very clearly our members see collaboration as essential to safeguarding their communities.”

“IAGR’s latest report highlights the prevalence of consumer complaints and regulatory concerns arising from the confluence of gambling and gaming and agreement that gambling regulators should play an active role to monitor and contribute to better regulation of the sector.”

The top challenges for gambling regulators

In their 2019 report, IAGR found that eSports betting and social gaming (with real money prizes) were reported to be in the top 5 of challenges for gambling regulators. Skins betting and loot boxes have also become increasingly prevalent in recent years, drawing the attention of regulators, often as a result of complaints from consumers.

In fact, social gaming, which involves games that people often play via mobile phones and are built on social networks, was complained about in half of all respondent jurisdictions.

Skin in the game 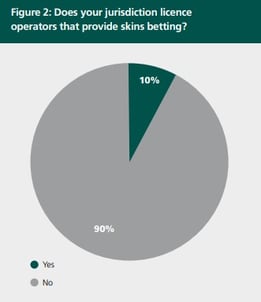 90% said they do not licence skin betting.

Skins betting, which involves the wagering or gambling of digital commodities or items (such as accessories or ‘skins’ for in-game weapons), were the subject of complaints across 37% of

jurisdictions. The practice rose to prominence following their release on Valve’s Steam marketplace.

This allowed the third-party developers to use the Application Programming Interface (used by the Steam marketplace) to create programs which facilitated the transfer of skins in order to place bets with the skins or gamble the skins.

When asked if their jurisdiction licence operators that provide skins betting or gambling, only 10% said that they do!

Jack in the box

Loot boxes, also known as loot crates, card packs, or weapon cases, among other aliases, are a type of in-game transaction which allows players to purchase or earn boxes containing random virtual items. They are a new method through which video game publishers have sought to monetise their products.

When jurisdictions were asked if they consider loot boxes to be a form of gambling, 3% said yes, 50% said that they do in some circumstances, and 47% said no. 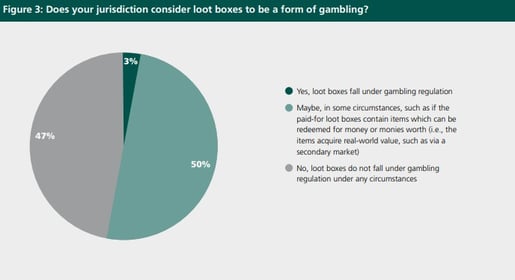 53% of respondents considered loot-boxes to be gambling.

Most respondents to the survey considered that the video games industry could borrow some player protection measures from the gambling industry to reduce the risks they pose. This included spending trackers and applying maximum daily spending limits, transparent odds, and self-exclusion schemes, as suggested by 67%, 53% and 50% of respondents respectively.

27% of respondents went as far as saying that, just like the contribution the gambling industry is required to make in many jurisdictions, part of the revenues from this area of the video game industry should go to public health, education, research and treatment of addiction.

Much like gamblers bet on any form of sports, some also place bets on virtual sporting events and leagues.

Betting on eSports is licensed by 45% of the survey respondent regulators, whilst only 23% of them regulate which eSports can be bet upon. This form of betting saw a massive uptick during the COVID-19 lockdowns as traditional sports were cancelled and people had to turn to other mediums.

The survey’s results indicate that there is broad agreement that safeguards such as the ability to detect and respond to suspicious player activity (60% of respondents) and control of the equipment used to facilitate the event (53% of respondents) should accompany wagering on eSports.

A notable percentage of respondents specified safeguards against match-fixing.

The role of gambling regulators

40% of respondents agreed that gambling regulators should cooperate with the video games industry. One European respondent noted they ‘have very positive dialogue with one video games operator.’

The mini-survey was conducted between December 2019 and February 2020 via an online survey, and a total of 30 jurisdictions responded to the survey, representing 46% of IAGR’s membership. The regional split of respondents was: Africa (33%), Europe (27%), North America (23%), Asia/Oceania (10%) and Central/South America (7%).

If you want to re-live the SiGMA Digital experience go to our Youtube channels – SiGMA – World’s iGaming Festival and AIBC Summit!

With recent booms in the Esports sector partly fueled by the recent pandemic one can only wonder what's next for the long time lingering market ...

Coming as the first CS:GO esports tournament with Regional Major Ranking (RMR) points in 2021, Flashpoint 3 features a brand new format and an ...

SiGMA and CeC will co-hosting an eSports conference in Malta for the SiGMA Europe show SiGMA Group has announced that it has entered into a ...